MicroSoft Vs Google (The Scroogled War)

Scroogled?
Last week the tech world also saw Microsoft launch a campaign against Google with the headline "Don't get scroogled by Gmail". The software giant accuses the internet giant of scanning the emails of Gmail users. According to MS, 70 per cent of the users are unaware that major email providers routinely scan their mails. Microsoft’s solution is to offer its own email service at Outlook.com. "Outlook.com believes your privacy is not for sale," says MS.

Last year in the US, the Gmail was at the second place with 69.1 million users. In the first place was Yahoo with 76.7 million users.  Microsoft’s Hotmail was a sorry third with 35.5 million users. (Microsoft has decided to rebrand its service as and asking the Hotmail users to migrate to the Outlook.com address.)

Although Google has been facing these charges for a long time, this is the first time Microsoft has decided to launch a frontal attack. It seems the Redmond based company is too late to have a go at Google because the search giant is well entrenched to swat away any form of attack.


The Petition To Nowhere

At the Scroogled site, Microsoft invites people to sign an online petition. In the week it has been up, it’s gathered about 5,600 signatures:
That’s hardly an overwhelming response, especially considering that the Gmail user base is reported at between 300 million to 425 million users. Rounding up to 6,000 signatures, and using the lowest 300 million figure, means that potentially, 0.002% of Gmail users have used the petition to join Microsoft’s protest. Of course, not all of those signing are Gmail users, as I’ll explain more below. And if Gmail has more than 300 million users, the percentage of Gmail users signing the petition would be even lower. But it’s already so tiny that give or take a million, ten million or even 100 million, it’s pretty clear Gmail users aren’t turning out to support this petition.
Microsoft’s goal is to reach 25,000 signatures. With it currently generating about 325 signatures per day, it might get there in another two months. The day-by-day chart: 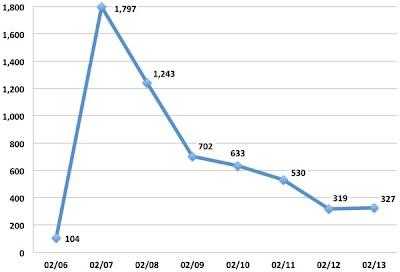 In a reply to Microsoft a Google spokesperson Samantha Smith has said that "Advertising keeps Google and many of the websites and services Google offers free of charge... We work hard to make sure that ads are safe, unobtrusive and relevant." The company also said that it was only machines that searched the mails.

In a blow to Microsoft, its search engine Bing fell to the fifth position in global ranking according to comScore's qSearch data. At the top of the table is of course Google. The second place goes to Baidu, the Chinese search engine and the third place is occupied by Yahoo. Yandex, the Russian search engine, that was at the fifth place moved up by one place to push down Bing. So it appears that Baidu and Yandex will cause more worry for Google than Bing. The rise of the two search engines proves that there is a lot of potential for local search engines. When will India have a search engine of its own?

There is also some happy news for Microsoft. Contrary to the expectations Microsoft’s web browser the Internet Explorer (IE) has held on to its position as the top browser for PCs. According to NetMarketShare, the share of Google’s Chrome, which was expected to breeze past Firefox, decline to 17.48 per cent. Firefox itself has a 19.94 per cent share. But, the real hero was IE. Its market share went up to 55.14 per cent in 2013 from the 51.87 per cent share it had in December 2011, surprising the analysts.