The Lytro camera lets you create living pictures that you can endlessly refocus after you take them. Share your pictures online, and your friends can instantly refocus them just like you do. 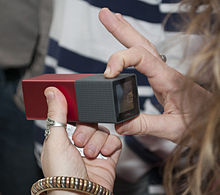 Lytro, Inc. is a light field camera startup company founded in 2006 by Ren Ng, a light-field photography researcher at Stanford University. Lytro's products are targeted to consumer use, while the first company to enter the market of plenoptic cameras, German company Raytrix, has targeted its products to industrial and scientific applications of light-field photography.

Lytro produces its own cameras rather than licensing its technology with an established manufacturer. In 2011, Lytro demonstrated capability to produce a camera that allows users to change the focus of a picture after the picture is taken. According to TechCrunch, plenoptic cameras such as Lytro's are "a new type of camera that dramatically changes photography for the first time since the 1800s."
The company's first camera went on sale October 19, 2011 in 8 GB (US$399) and 16 GB ($499) versions, and began shipping on February 29, 2012.
In February 2012, the company won the Silicon Valley / San Jose Business Journal’s Idea and Innovation Award in the consumer technology category.